Liturgy and the Way of the Cross

Since the Second Vatican Council, Catholics have been more aware of the need to enter fully, consciously, and actively into the Church’s liturgy. Sacrosanctum concilium calls this “the aim to be considered before all else” (SC, #14). At the center of our Catholic faith is the celebration of the Eucharist, the other sacraments, and the Liturgy of the Hours. The liturgy constitution describes these liturgical rituals as the source and summit of the Church’s activity (SC, #10). And yet, with nearly 40 years of celebrating the liturgy in the vernacular, some of the faithful do not seem to be engaged in the ritual prayer of the Church. Almost every Sunday, at my home parish, or when I attend a liturgy at various places around the country, I see people praying from a devotional book or clutching the Rosary during the celebration of the Eucharist. As the liturgy constitution says, “liturgy does not exhaust the entire activity of the Church,” (SC, #9). It goes on to speak of popular devotions as being “fashioned [so] that they harmonize with the liturgical seasons, accord with the sacred liturgy, are in some way derived from it, and lead people to it since in fact, the liturgy, by its very nature far surpasses any of them” (SC, #13). Pope Paul VI, in his apostolic exhortation “For the Right Ordering and Development of Devotion to the Blessed Virgin Mary” (Marialis cultus) (February 2, 1974), noted, “exercises of piety should be harmonized with the liturgy, not merged into it.” (MC, #31) There are times when communities try to attach the “Way of the Cross” to a liturgy such as adoration and Benediction of the Blessed Sacrament or the Liturgy of the Hours. This should be discouraged.

This article will examine the “Way of the Cross,” providing a historical overview, some examples of devotional settings, and a look at recent settings that are in closer harmony with the liturgical life of the Church.

The devotion the “Way of the Cross” or “Stations of the Cross” is also referred to as the Via Crucis or Via Dolorosa. The Via Crucis designates a stretch of road between the Antonia fortress and Golgotha, along which according to tradition, Jesus Christ walked under the weight of the Cross. The Way of the Cross signifies a series of images or tableaux representing certain scenes of Christ’s Passion, each corresponding to an incident, or a form of devotion connected with each depiction. It was Pope Clement XII who officially recognized the Stations of the Cross as a noble devotion for the Church in 1731, yet the Church has never provided an official ritual.

The Stations of the Cross are depicted in works of art made of stone, wood, or metal, sculpted or carved, as well as paintings and engravings. The erection and use of the stations started to appear in the house of the Church by the end of the seventeenth century. Saint Leonard of Port Maurice (1676 – 1751) established the Way of the Cross in more than 500 places, including the Coliseum, in Rome, sometime before 1751. Since then it has become a tradition for the Pope to lead the Way of the Cross through the Coliseum on Good Friday. Over the centuries the number of stations varied, but 14 stations have been part of the devotional life of the church for at least 500 years.

One of the most famous and oldest texts of the Way of the Cross is attributed to Alphonsus Ligouri (1696 -1787), founder of the Congregation of the Most Holy Redeemer (CSSR). Each station begins with a text proclaimed by the minister (“We adore you O Christ and we bless you”) and a response by the people (“because, by your holy cross you have redeemed the world”). This text is adapted from a prayer before the Blessed Sacrament attributed to Saint Francis of Assisi (1181-1226). At some point the singing of the “Stabat Mater Dolorosa” (“Maintzisch Gesangbuch,” 1661) with a text attributed to Jacopone da Todi (1230 -1306) was added to the Stations of the Cross along with a recitation of the Lord’s Prayer, Hail Mary, and Glory Be. Since the end of the Second Vatican Council, it has become popular to add a fifteenth station, usually at the Eucharistic table, that commemorates the Resurrection of Christ.

I grew up in Butte, Montana, in the 1960s and ’70s in a city with a population of about 40,000, a melting pot of Irish, Finns, Italians, Cornish, Welsh, Serbs, Chinese, and others. Butte is a city with a sense of place and culture, with deep religious roots. In those early years, Butte boasted ten Catholic parishes, eight parochial grade schools, and two Catholic high schools. I remember as a child our entire grade school, of nearly 500 students, processing to the church on Friday afternoons during Lent to celebrate the Stations of the Cross. The celebration included a procession to each station by the priest, servers carrying candles and the Processional Cross. Except for the response to the opening dialogue, the singing of the “Stabat Mater,” and the recitation of the Our Father, Hail Mary, and Glory Be, the priest read the texts. Yet the movement, the dialogue, the music and the prayer, in which 500 students participated, was only a foretaste of what was to come at the Sunday Eucharist.

When pilgrims pray the Way of the Cross, they often make a connection between their suffering and the suffering of Jesus. Pope John Paul II often preached on suffering and the Way of the Cross during his lifetime. During the Pope’s 1998 visit to Cuba, he met with the sick and the elderly at the Shrine of Saint Lazarus at El Rincon, La Habana. Addressing the gathering he said, “To our human questioning, the Lord responds with a call, with a special vocation which is grounded in love. Christ comes to us not with explanations and reasons, which might either, anesthetize or alienate us. Instead, he comes to us saying, ‘Come with me. Follow me on the Way of the Cross.’ ” Christ has taken the lead on the Way of the Cross. He has suffered first. He does not drive us towards suffering but shares it with us, wanting us to have life and to have it in abundance” (see John 10:10). Praying the Way of the Cross is one example of our journey through life, where we can conform ourselves to the Passion of Christ and thus daily take up our cross and follow after Christ (see Luke 9:23).

During the 1990s and into the new millennium, Pope John Paul II and Pope Benedict XVI have used a set of Stations that differed from the traditional 14. Since Stations IV (Jesus meets his mother), III, VII, IX (the three falls of Jesus), and station VI (Veronica wipes the face of Jesus) are not mentioned in the Bible, they were omitted. The Way of the Cross used by the Popes follow:

While some faith communities have adopted the stations celebrated by Pope John Paul II, many have not. The Church provides both sets of stations for the faithful.

On December 17, 2001, the Congregation for Divine Worship and the Discipline of the Sacraments issued the Directory on Popular Piety and the Liturgy (DPPL). This Directory makes several points about the Via Crucis, the Way of the Cross:

I recommend three newer settings of the Way of the Cross for use today:
The first is The Way of the Cross, published by Liturgy Training Publications of Chicago (2003). This resource will serve varied parish groups. The collection contains, the Ordo for the Traditional Jerusalem Stations, the Ordo for the Scriptural Stations, and the Ordo for Walking with the Women of the Gospels. Besides the leader/reader edition, there are three booklets for use by the people. The leader/reader edition also contains an overview of devotions, recent papal documentation, and an overview of the content of the collection among other catechetical insights. A two-page outline for “preparing to walk the way” offers suggestions for organizing the celebrations. Each of the three booklets contains inspirational illustrations by Julie Lonneman. More information about these resources can be found at www.LTP.org.

The second is The Biblical Way of the Cross, by David Haas, published by GIA Publications of Chicago (2005). This setting follows the biblical model Pope John Paul II initiated in 1991. The Biblical Way of the Cross offers a scriptural account of the condemnation and Crucifixion of Jesus. This setting includes scripture readings arranged for two readers and musical responses for the people, composed by Haas and Marty Haugen. The iconic art of Nicholas Markell draws one into the mystery of Christ’s Passion. More information can be found at www.giamusic.com.

Finally, The Way of the Cross for Children, by Christopher Walker, Paule Freeburg, dc, and Jean Germano, published by Oregon Catholic Press (2003). This setting includes a leader’s book, a children’s book, a CD, bookmarks with the art from each station, and laminated posters of each station. A common acclamation with the text “By your cross you have set us free” is used for each station. Additional music is included for each station. The children’s book contains an opening and closing prayer along with the music and the colorful art by Germano. Germano’s watercolors of each station draw both children and adults into the mystery of the Passion. Walker and Ferburg’s music and texts take up the call of the DPPL to provide both texts (and music) “written in a clear, simple style” (135). More information can be found at www.ocp.org. 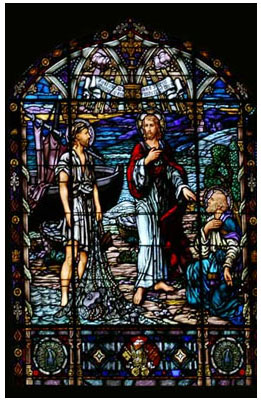